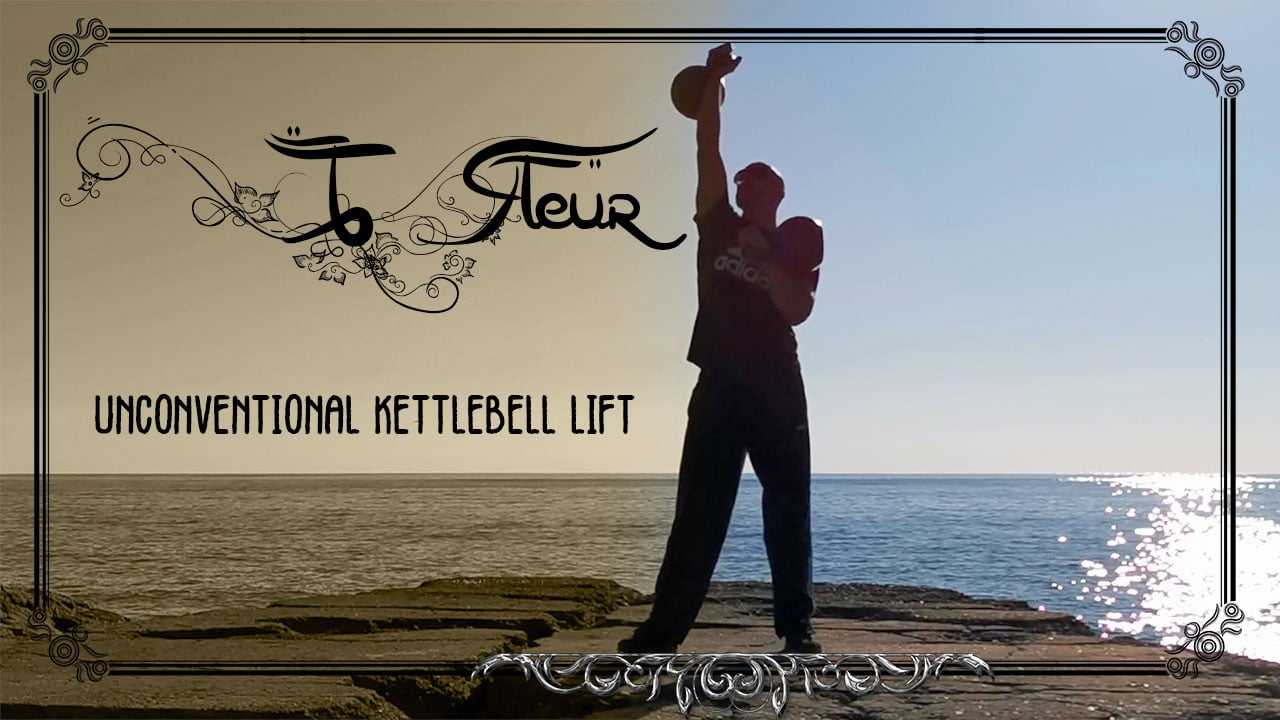 With this unconventional lift, the kettlebell is lifted from dead to overhead with the following kettlebell exercises combined, low windmill, side curl, and rotational press. The lift is super effective because it targets so many areas normally neglected in training, even in kettlebell training.

Download the FREE PDF
with all the information for this lift, photos, information, and much more.

The lifting from a semi lateral and frontal bend at the hips is not a position one usually lifts in, thoracic rotation is often overlooked in most training that is not martial arts, and the curl is quite often frowned upon in the kettlebell training (functional world) community because it’s not deemed functional.

Lifting from angles and positions not usually lifted from is something one should always do to become more injury-proof, it’s a wonderful thing to do, as long as it’s done through proper progression.

Anything with thoracic rotation is lacking tremendously from most training apart from martial arts, even in martial arts you need to be lucky enough to have a good trainer/coach that will cover all the important movements. If I had to point out one training regimen that is seriously lacking rotational movements then it would be CrossFit, not to put it down, just stating facts. It’s quite clear that most movements happen at the front and without rotation.

The biceps curl is often frowned upon in the functional world because “it’s not functional” which is not true at all, we curl almost just as much as we hip hinge. The reason this myth came about was due to biceps curling being associated with bodybuilders who curl for aesthetics, aesthetics are not functional but the curl is very functional and is an exercise left out in most kettlebell training programs or workouts, but not here at Cavemantraining.

The low windmill targets everything isometrically around the spine, spinal erectors, quadratus lumborum, obliques, etc. the gluteals, hamstrings, and adductor magnus are doing the lifting. Once in a hanging position, the whole body works to stay unmovable against the pulling force during the curl, especially the obliques and quadratus lumborum on the opposing side. The lats on the curling side also need to do their work to pull the elbow down. The curl works all the elbow flexors and forearm pronators (not often worked). The lift comes to overhead with the rotational press which is a shoulder press combined with thoracic rotation into the working side. Once the weight is overhead it is returned via the same path in reverse.
The lift can be made more complex and effective by extending the lift with a high windmill. The next level of complexity would be working with two kettlebells.

The lift is not a beginner’s lift and should be approached with extreme caution through proper progression. Each part of the lift should be mastered individually before stringing them together. The weight used should be light to be able to focus on perfecting the movement. The lift is to be performed slow and controlled. Once mastered, the speed can increase, but never to the point that form and technique suffer. Programming the right amount of reps, rest, and recovery is also important.

Although one might be strong enough to windmill and press an extremely heavyweight, it’s the curl which you should base the weight selection on. The curl, especially the rotation of the forearm is usually not conditioned for the same heavyweights that you can windmill or press, and if you use a weight too heavy (letting ego get in the way) then you will experience elbow flexor and/or forearm rotator issues.

Why would you train this lift? You want to perform this lift to injury-proof yourself from more angles than you already are, to master different movements, the more movements you master, the more prepared you are to tackle anything and anything at any time. Personally, I like to be able to lift from any position or angle, it doesn’t get more functional than to be able to lift things from an awkward position. I know that can sound far fetched, right now you’ll think that you’ll never choose or have to use it, but once you have the ability you will find that the body adapts and the patterns you trained in will come to good use. You might even use parts of it, or you might find yourself stuck in a tight space one day and needing to lift something from the ground and place it high up right behind you, with this lift you can! Even if you won’t, use it to look cool and impress people, that is functional too if you’re an entertainer!

This awesome kettlebell strength complex is part of the book Kettlebell Complexes Made Simple, available on Cavemantraining and Amazon.com.

To learn more awesome movements like this, come and join our exclusive, private, and online Caveman Inner Circle where a new weekly kettlebell workout is published each week for which can receive coaching and ask questions. Other options are to buy the Kettlebell Exercise Encyclopedia or join our over 12,200 large kettlebell community on Facebook.

Become Kettlebell Certified
Take one of our online kettlebell courses.

How to begin kettlebell training?