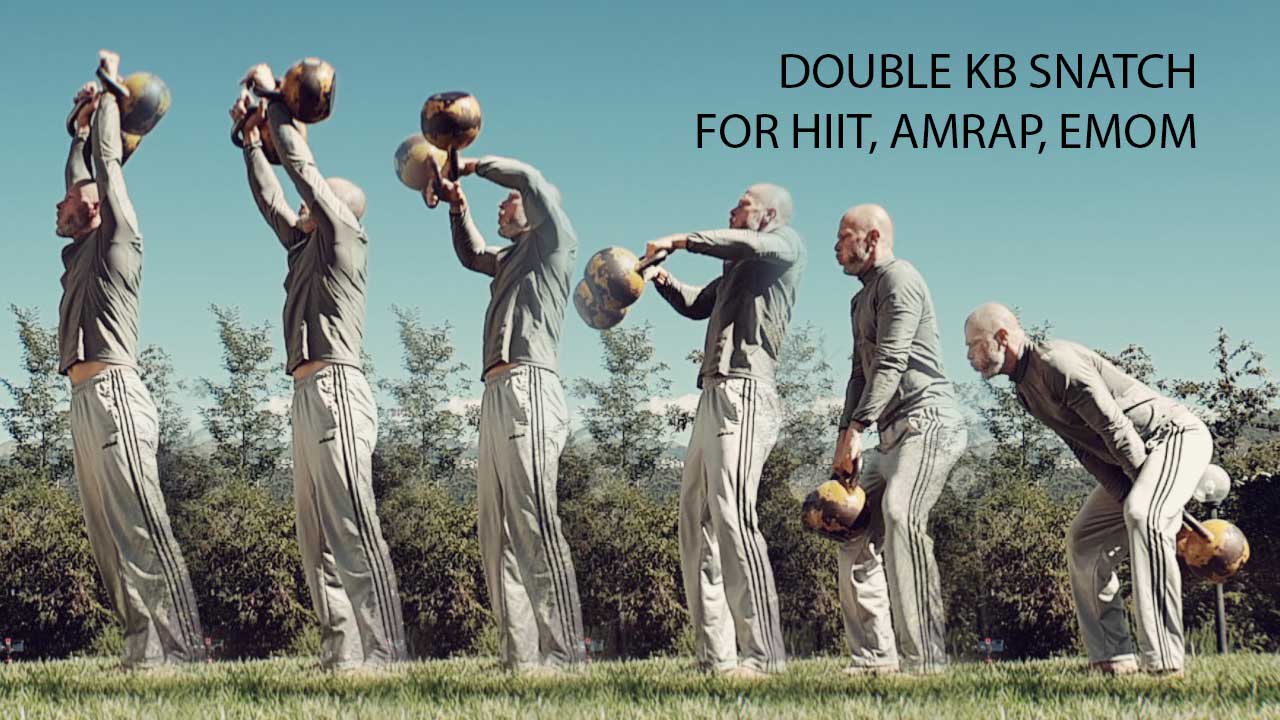 This video demonstrates several double kettlebell snatch variations. Each demonstration gives you a little bit of info, just the tip of the iceberg when it comes to snatch details and information.

The first demonstration is that of the full swingsnatch with double kettlebell. The movement is a hip hinge, this means two joints, no ankles involved. The kettlebells are inserted between the legs and then pulled out.

This demo points out that hand insertion is super important when it comes to snatching. You can break this down in hook grip, open up, punch through, catch the weight, press out, and lockout. The second point is that one should stay in extension as long as possible and not follow the kettlebell to avoid lower back issues.

Double kettlebell snatch with an undersquat

This variation of the snatch is best performed with a squat. That is not to say that it can’t be done with a hip hinge, it just isn’t the most optimal movement to move heavy weight explosively.

This demo points out how space is made by bringing the head, shoulders, and chest back to make space for the kettlebells that are dropping from overhead into racking position. The second point is that of the elbows needing to be placed under the weight. Transitioning from one grip to the next is important to avoid ripping hands, this is all explained in our books, courses, certifications, and streaming videos.

The third demonstration is that of the half hang snatch performed with a squat movement. The hang snatch and dead snatch are some of the best variations to work on power and get the heart rate up super fast. This is not a variation of the snatch that one would do unbroken for long cardio sessions.

The fourth and final variation—in this video as there are plenty more—is that of the double kettlebell half pendulum swingsnatch. Three joints are used for this movement and the bells are first pushed and then pulled. The biggest difference between the hip hinge (hh) and pendulum is that the hh swing is an insert and pull whereas the pendulum is going with the flow and starts with a push followed by a pull. The hh is great for low reps and the pendulum is great for endurance sets.

These are just a few little details on the kettlebell snatch, there are literally hundreds of pages of information about the snatch. How to avoid blisters, bruising, lower back issues, efficiency, and so much more.

The books listed in the video are:

The Kettlebell Exercise Encyclopedia has all kettlebell exercises listed and grouped with tons of step-by-step information on how to perform them. Snatch Physics breaks the kettlebell snatch down and also has a 21-day progressive program that anyone and follow. Kettlebell Complexes Made Simple contains some of the best kettlebell complexes broken down in easy to understand steps and all designed by Cavemantraining. All the books are suitable for beginner to intermediate. With these books, you can learn how to train safely, efficiently, and supercharge your training programs. If you’re a trainer or run a gym/box then these would add tremendous value as they enable you to introduce many new and exciting exercises to your clients.

30 minutew of unbroken half snatches