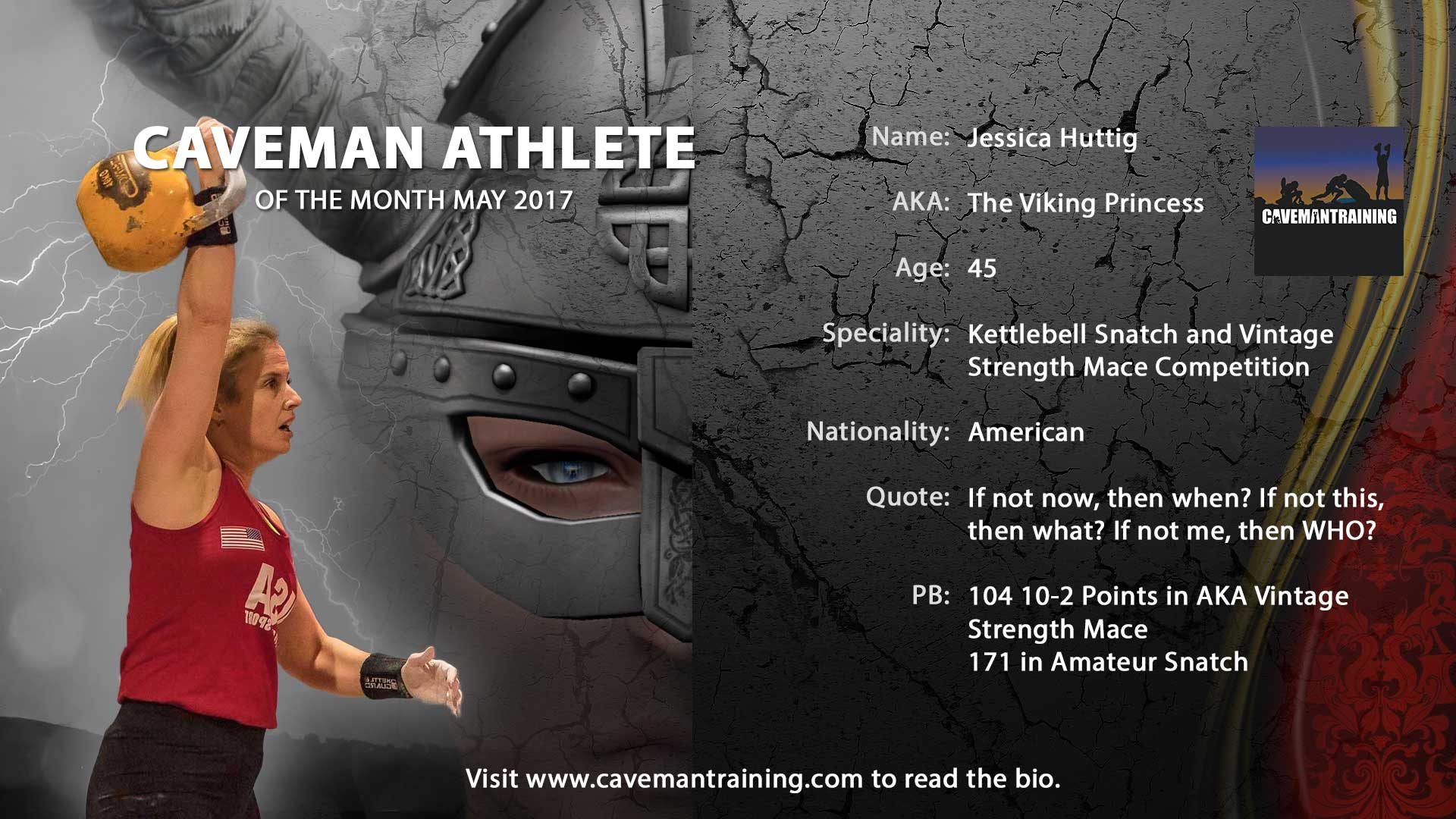 I am so happy that I took the opportunity to blast through that self-limiting story and achieve what I was meant to achieve.

There really are no limits on what you can achieve. Dream bigger than real, then figure out how to make it happen. Most people told me I was too old, started too late, too overweight, had too much ground to cover, I had never done something like this so I probably couldn’t do it. I never listened to them. I knew in my heart that being selected for Team USA was worth the price I paid to get there. I look forward to competing at World Championships in 2017 for the second time.

Don’t let people determine the ending of your story. It is up to you and what you are willing to commit to!

Without further ado, I present to you The Caveman Athlete Of The Month May, Jessica Huttig AKA The Viking Princess.

National Record Holder: First female to achieve over 100 (104) point in VS Mace

If not now, then when?
If not this, then what?
If not me, then WHO?

I have always been an athlete and a coach. Having me on your team means that while you may not have a superstar, you have an athlete who will get the job done. I was a three season athlete in high school then rowed Varsity Crew in college. Although I did a wide variety of sports I never felt at home or in love with any of them. I have coached many youth teams at various levels.

That was until I found kettlebell sport. The first time I was introduced to it was by my coach at an unrelated event. I did not immediately become hooked and it was a few months later when the new trainer I was working with was preparing for this kettlebell sport thing. I figured the Universe had placed this in front of me twice, it was time to listen. I started lifting GS style kettlebells and reached out to Valerie Pawlowski for guidance. After all, as a World Champion, she was the most skilled athlete in my circle. After one training session I was hooked. Placed 4th in my first competition but was determined never to finish out of the medals again. Which is exactly what has happened.

Mace and club work were something I discovered by accident and just seemed to come naturally. Again, working with the best, Mr. Maceman Rik Brown and Adex Don Giafardino, my skills continued to improve and have placed first in 6 of the 7 competitions I’ve entered and being the first woman to earn more than 100 points in competition.

Before I started KB sport and Vintage Strength competition I would never have believed that “at my age” I was capable of achieving at such a high level. I am so happy that I took the opportunity to blast through that self-limiting story and achieve what I have always been meant to achieve.

What does one need to do or have, to achieve great accomplishments?

My key to success is that I simply made a decision that I was going to accomplish specific goals. Emotion is a powerful motivator or de-motivator. If I didn’t clearly KNOW where I was going and honestly commit to achieving that goal, there were many places along the way that I would have given in and turned back. There were many times when my emotions included the fact that I didn’t feel like doing the workouts, I wanted to just relax. I had already made the decision and my emotions at the time just did not matter.
Because I decided to do whatever was necessary to succeed, success was the only option.

Above is the video of my first event at IUKL World Championships in Aktobe, Kazakhstan. I mean seriously? I never would have thought that I was capable of doing something like that 2 years ago. Then what seems like all of a sudden, I am walking out of a flashing kettlebell tunnel. And standing behind the platform that I have earned a spot to compete on. I would say it was unbelievable BUT I believed I could get there the entire time, and that is how I ended up there!

One story in particular was a student I had in a science class. She was labelled as “functionally deaf”. I was required to wear a transmitter when I taught and she had a receiver that she wore in her ear that multiplied the sound so she could hear some sounds. I was doing a lab on sound, specifically resonance. The students put rubber bands over different lengths of PVC pipe. They then plucked the rubber band and stretched it until they heard the same pitch of rubber band and PVC pipe in resonance. I thought it was a great lab and kind of fun but I almost didn’t do it because I had decided that she would not be able to and would feel bad. In the end I am so happy that I did the activity. As the students were working I noticed that there was a large group around her lab table. Many of the student were struggling to hear the sounds. She had solved that problem by taking the transmitter, putting it at the end of the pipe, turning up the volume on her hearing aid and letting everyone use it to hear the resonance.
It was one real example that limits are merely something that we decide exist either for ourselves or those around us. It is when we learn to challenge ourselves, push past where we though those limits were, THEN we learn what we are truly capable of.

When did you start training?

I clearly remember the day when I DECIDED to make AKA Team USA and compete at UIKL World Championships. I had just completed a training session with my coach Valerie at her gym in Peapack, New Jersey (a 3 hour commute each way). We were just chatting and I remember saying “Wow, that would be so cool to be on Team USA!” to which she responded “Oh, you could totally do that!”. The rest is history!

I train between 3 and 5 days a week. Training for me includes sport specific exercises such as KB strength training, mobility and strength work with mace and clubs. I also cross train in a number of different ways including yoga, stand up paddle board, and kayaking.

What do you eat for performance and recovery?

Diet! Yes, diet is one of the most important aspects of training. Without proper nutrition for fuel, muscle building and recovery I see many athletes with injuries as a result of diet. When I am in strict competition mode I eat a low carb/high fat diet. I use a nutritional supplement line as a basis for my nutrition.
I hesitate to give too many details as the exact ratio I use for my macros was determined specifically for me and my metabolism. I measured BMR and RQ values. Along with daily monitoring of body composition to make sure that my metabolism remained high and at no point did I lose muscle. I would also like to take this opportunity to mention that in March I decided to compete in a lower weight class at US nationals which required that I drop 40 pounds by August, while completing intense training sessions. Thus the monitoring body composition. I could not afford to lose muscle or performance. I also hired a metabolic coach to assist me with the process. I eventually realized I already had all the knowledge myself and now assist other athletes and those who struggle with weight loss to do what I did.

Favourite exercise tools of choice and why?

Love, Love, Love my Adex mace and clubs. They are so versatile. I can make them ultralight and focus on mobility and cardio type exercises or pack on the weight and focus purely on strength!
I love the training I do with my Adex team! We are looking to build that into something bigger and introduce more people into mace and club work!

Who would you nominate for Caveman Athlete of the month and why?

I would nominate Valerie Pawlowski. She is the reason I have achieved at a high level. She inspired me to dream bigger than real then coached me step by step on how to get there. She is a multiple World Record holder (2015, 2016), Master of Sport AKA one arm Long cycle, she is committed to assisting her students and teaching programs designed to bring more people into the sport.

Check out all other Caveman Athletes of the Month:

Like and share Jessica’s story to let others know that there really are no limits on what you can achieve.

Knees If You Please

How To Stop Banging Your Forearms In The Kettlebell Clean

7 Kettlebell Myths You Should Know