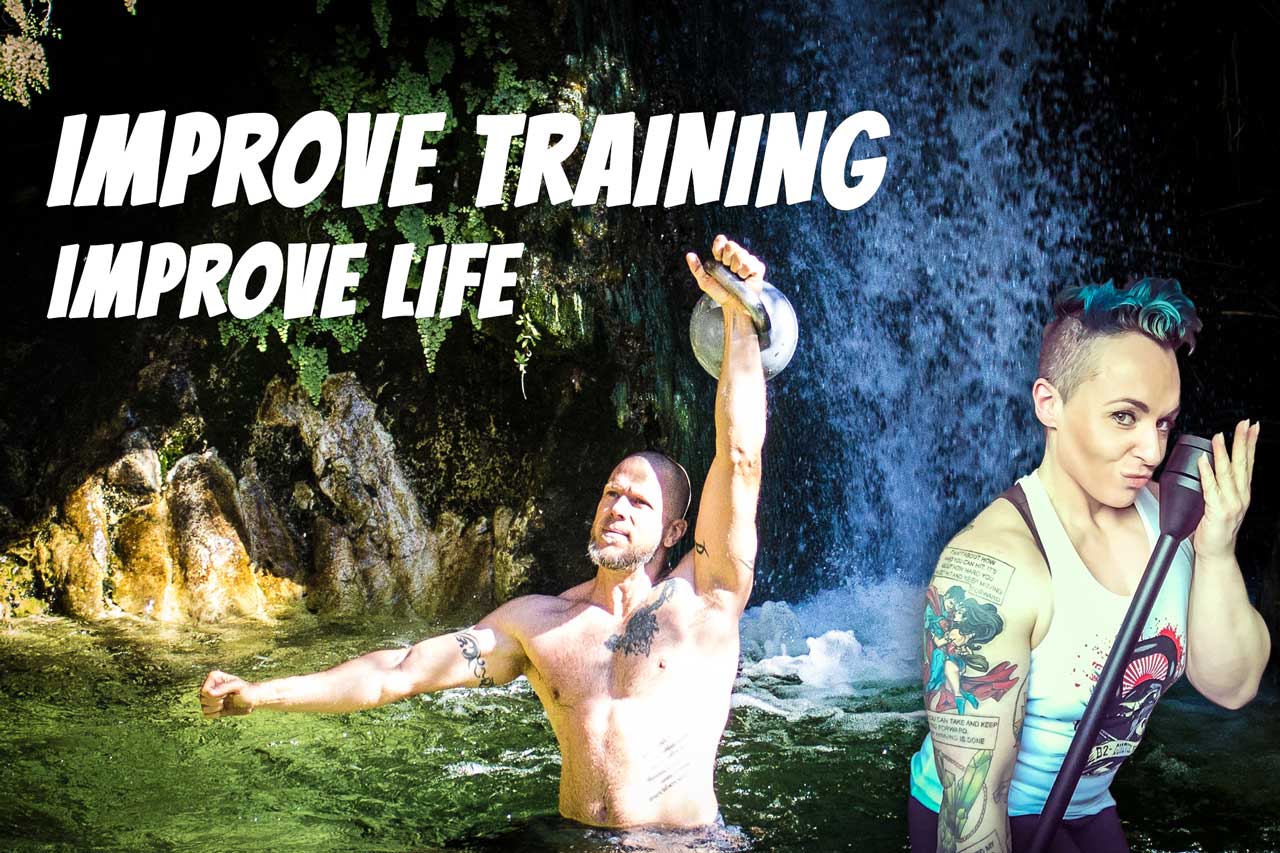 The #1 Thing To Improve Your Training and Life

Todays article will help you no matter who you are. With input from Taco Fleur, Kirsten Tulloch and Dr. Gregory Ellis, we’re going to cover the_number_one_thing that improves the training of Crossfitters, Kettlebell enthusiasts, Cavemantrainers, and Mace swingers all across the world, it will even improve the quality of life for those that don’t train.

It’s not some hocus pocus magical pill or imaginary thing invented for clicks, I stand by this wholeheartedly, I’d bet my life on it if I was challenged to back it up. This one thing will improve your training and life, period.

That’s the voice in the back of your mind, that annoying little wimpy voice that talks to you whenever there is something good for you, but it tells you “it’s too hard”, “too many”, “too tough”, “too far” etcetera. Let’s call that voice Wim (no offence to all the Wim’s in the world).

Here’s what you need to do, tell Wim to shut up and do what’s best for YOU.

You might have figured out by now that I’ve been talking about our good buddy
Mr. Mental TOUGHNESS.

I speak from experience, watch me complete 500 reps below

One who is not mentally tough gives up easily, not just in training, but in life, whether it’s a tough decision at work, personal life or during training. Wim is a negative part of your life, Wim procrastinates, Wim wants things done for him, Wim likes you to be lazy, Wim likes his feet up on the couch and have everything served to him on a silver platter. You need to kick Wim out of your life and let Mental Toughness take control.

How Do You Get Mentally Tough? How Do You Train It?

Everyone wants it, if you don’t, you’re lying, one can simply not want a better improved life, one simply does not want to train better. It’s just that Wim has taken over and he’s coming up with any excuse not to work hard, so he tells you “Just tell them you don’t want it”. Today you start by picking something that Wim doesn’t like and push yourself through it, kick Wim in the gonads and tell him to ‘F’ off! Try simple things like:

Increase your resistance against Wim and let your mental toughness grow and grow, over time he will take over and become the dominant side. When that times comes, I guarantee that your life will be easier, your training will be easier, everything will be more enjoyable.

Don’t believe me? Below are some wise words from some other great and tough people.

Mindset is one of my “things”. You cannot out train an unsuccessful mindset. It doesn’t matter how talented or genetically gifted you may be, if the head isn’t right, it ain’t gonna happen.

Mindset is very often the deciding factor between winning and losing. Whether that be on the platform in Mace Competition, or Girevoy Sport or on a bodybuilding stage. Your ability to push on and maintain your composure when all around you are losing theirs will be the single thing that pulls you through and ensures you hit your target.

So is a strong mindset something we are born with? I dare say some people are but the majority of us have to create one. We have to make the choice that “good enough” is not enough. In the words of my fellow strength coach Zach Even Esh,

“Good enough is the death of greatness.”

My own background began in bodybuilding and I have many stories to share from that time in my life that illustrates the importance of a “never quit” attitude. But the story I want to share with you to get my point over is one about a client of mine. If her story doesn’t illustrate the benefits of mental toughness then nothing will.

This lady will read this and know who she is, but for privacy sake I’ll refer to her as Jo.
Jo has 3 kids and when her youngest was 9 months old she had a severe stroke. Totally unexpected and out of the blue for a young, healthy woman who was active. It was so severe that she was given a wheelchair and told point blank to get used to it as she’d never walk again. She couldn’t do anything for herself. She went from being Supermum to relying on others for absolutely everything. But she did not accept the doctors verdict. She made it her goal to get her life and her independence back. It took several years but she got out of that wheelchair and managed to walk slowly with a cane to aid her. Now that alone is amazing. But for Jo that still wasn’t enough. She became mobile enough to start working again. She was able to drop the “invalid” label that had been attached to her.

A few more years pass and Jo makes numerous attempts to regain strength and fitness only to be met with closed doors by multiple “trainers” who heard her health history and made feeble excuses for not helping her. Then one day I received a message from her on Facebook. She had heard about my strength classes and asked very simply, “can I come?” I told her of course she could. She told me her back story and my answer remained the same. When Jo first came to class, several things needed to be adapted to accommodate her mobility but nothing that wasn’t workable. 2 years on….. Jo no longer walks with a cane. She no longer wears a neck brace. Occasionally she arrives to class on her bike! She now works full time again. She is living the life she chooses and she never accepted her fate. She took her life into her own hands and made it her own again. Because she chose to do so.

That people, is a winners mindset right there. Mental toughness!

The ability to maintain composure, inner strength and self belief is what took that lady back from the edge of nowhere and back into living a productive and fulfilling life.

Few stories can top that one. It’s inspiring and it shows point blank the strength of the human spirit to overcome adversity. It takes guts to stand alone when others around you are singing from a hymn sheet that isn’t the same as yours.

We live in a society where comfort is king. People do “enough to get by” and no more. They work out a few times a week to make “a bit of a difference” but rarely hard enough to fulfil potential.

Many people out there are incredibly good at what they do. But it is what goes on in your head and your own internal self talk, that dictates how far you will take it.

Never, ever underestimate the power you have in your mind. In the past I have been a bodybuilding champion numerous times and made it to international level. Few people would believe that I started out as an obese teenager with no confidence or friends when they look at the pictures of where I ended up. But that was where I started. And even at age 16, I made the decision that enough was enough.

It takes a conscious daily effort to maintain a positive mindset. We are surrounded by images on social media of negativity and destruction. We go onto Facebook or Instagram and we are not always met by images of puppies and unicorns. Some people use social media as a place to vent anger and frustration and if we are not careful we can be sucked into that negative void and we can go from feeling upbeat and happy to worried and fearful.

We won’t always feel like training. So when that happens, view your feeling of apathy as an item that can stored away in a box. Take that negative attitude and put it away. Take out the attitude you want and put it on. And get on with it. It really is that simple. And the more you do it, the easier it gets and the less often you need to put away your negative feelings as they will simply appear less often. I have practised this for years. Trust me. It works.

We are all united here under the unconventional training banner. All of us here know what a hard workout is and have great appreciation for it is and what it does for us. View your attitude and mindset as a part of you that also needs training. Be grateful every day for the strength and power you possess and never take it for granted. Keep moving forward and remember, pain is temporary but glory is forever.

Eastern philosophies have long argued that thoughts are things. Although you can’t touch or grab a thought, its power is astonishing. It can make or break you. You must embody thoughts that drive your performance. A thought can overcome any weakness of the flesh; it can make the spirit soar.

Take the right thoughts (attitudes) into life with you and you will become empowered, enabling you to master all your goals. Giving up is conforming. You must engage your mind to create change throughout your life. You become self-reliant and your Power grows exponentially.

One of the key features of self-reliance is:

These will provide a road map and imbue your mind with sustainable power. This is the essence of mental toughness. Once set into play it becomes very difficult to deviate from the paths you have forged during your thinking. This is how things get done; they are first created by thoughts.

In my own life, I decided that I wanted to get my PhD in the study or how the body works. My fist goal was to establish the steps I needed to follow to reach that. I could have easily been defeated right there because in school I did not study; I had no idea how to learn so the first step was to learn how to learn.

After I reached that goal I needed to follow each step in an orderly way putting one foot in front of the other as I went.

That added up to 20 times more benefits in

Continuous awareness of awareness will enable people to effortlessly remain centered in their spiritual identities as they live their lives. This enriched spiritual capital will generate dividends in inner peace and tranquility, greater mental clarity and acuity, and enhanced mindfulness in the present moment.

Don’t be scared to speak up, your story, questions or doubts below or on this Facebook post.