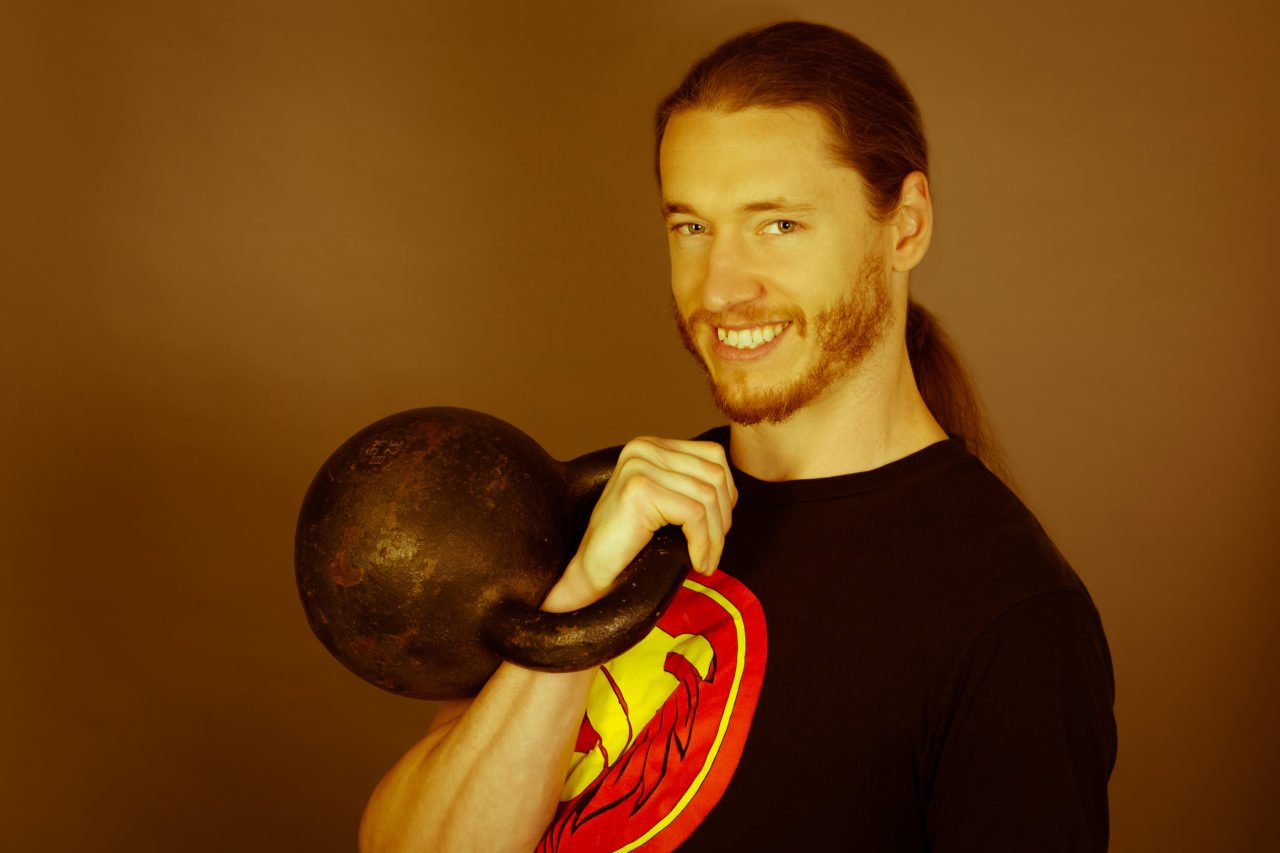 This week’s interview is with physical culture Renaissance man Logan Christopher who is 31 years of age and known as the best kettlebell juggler in the US.

Can you tell us about the days you were weak and scrawny? How did it feel, what made you make that breakthrough to get into serious and devoted training?

I grew up that way and just thought it was who I was. Like many boys I was into superheroes and ninjas and thought it would be really cool to do that stuff. But I didn’t think it was actually possible, not for me anyway. My older brother started to get me into training but I never saw much in the way of results because I was doing conventional bodybuilding, not being exposed to anything else. It was shortly after high school that I got into bodyweight training. Along with that I happened to learn what it took to be effective in training too. As I began to see results it snowballed from there.

At what age did you start training seriously? Did you get into kettlebell training straight away, or did that come later?

As I mentioned it was right around 18. It started with bodyweight. Because I was having phenomenal results with that I began to think that was the ONLY way to train. But then my friend got some kettlebells, I played around with them, and enjoyed it. So I began to use kettlebells. Then over the years I just kept adding even more tools into what I used.

What is your favourite exercise and why?

That is way too difficult of a question to answer. So I’ll mention a few of my favorites:

As for why, these are all pretty full body exercises that can be taken to very high levels.

Typically five or six. What is involved in those training days’ changes up all the time.

What is your preferred training at the moment, which is producing the best results, and why?

Right now my main goal is the Beast Snatch Challenge. That is snatching the 106 lb. kettlebell 100 times in ten minutes. I’ve been working at this for some time now as it is a difficult feat of strength and endurance. In addition to this I am working on some of the basics with presses, pull-ups and squats and then a few fun things on the side.

Have you ever had any serious injuries, if so, what, how did they occur and how did you overcome them?

Absolutely. I had a chronically bad right wrist that stopped me from progressing in handstands. After years of being slowed down by it I got fed up and did a combination of physical rehab, along with using topical treatments like liniments, and mental/emotional work. After that I was good to go.

What workout on the Cavemantraining channel speaks to you and why?

You’ve got lots of cool ones on there. One that stands out is the Super Advanced Kettlebell Workout

I think various twisting motions as done in bent presses, windmills and others are underused by people. Most training is one dimensional, like straight up and down, but life and athletics seldom moves like that.

Best achievement that you’re the proudest of?

One of my favorite goals that I hit was supporting over 1000 lbs. on top of the wrestler’s bridge. This feat of neck and whole body strength took years of bridging to work up to, as well as creativity in figuring how it could be done.

Please list some of the awesome unusual things you can do, with what weight, and how many reps etc.?

There’s too many to list. Instead I’ll point you to this page I created which showcases some of my best and most unusual feats: http://legendarystrength.com/best-of/

Future goals? Anything in specific you want to achieve and why?

Besides the beast snatch challenge I previously mentioned one of my other big goals is to reach a legit one arm chin-up. To me this is one of the ultimate strength moves that shows bodyweight mastery.

I like to see more older people get into exercise, how do you feel about that?

Yes. Exercise is a lifelong pursuit. In our modern society we don’t move as much as we should, so this can be supplemented at any age with a solid workout program. Simply start with where you’re at and build from there.

What would you say to the older people, to motivate them, to get them starting something?

It is move it or lose it, and sadly many older people seem content to lose it, but it’s not inevitable. You don’t need to do crazy things like I do, simply work to regain good quality human movement, such as being able to do a full squat, and your life will be better and more pain free.

I have a lot of problems with my left side lately, weak with TGU’s, weak with snatches, any tips from one professional to another? I train unilaterally, always doing the same amount of reps, lately been trying to always start sets with my left side, and if doing high volume reps I match on the right what I was able to do with the left and don’t go further.

That is certainly a good option. Many people seek to be balanced but it is probably unattainable really. And that’s not necessarily a bad thing, we just don’t want to be too far outside of balance. It is possible that your left side may need to do some different things than your right, if the weakness is caused by not being able to control the muscles, nervous impingement or something else though.

Training with bare feet, your thoughts?

Absolutely. Unless you’re doing something where shoes are close to essential like Olympic lifting, then I would highly recommended. It gives you proprioceptive awareness, thus aiding in your balance and movement ability. It builds prehensility, the ability to actually use your feet, rather than having them basically sit inside a cast all day long. Lastly, if you train outside it gives you an electrical connection to the ground which has numerous health and recovery benefits too.

My 15 year old son is more interested in playing games behind the computer all day, his posture is bad, and I know sitting down for a long time every day is going to affect him later in life. No matter what I try, I can’t get him away from it, I’ve sat down and explained the ramifications, but he will not take breaks. Do you have any advice for Benooi (my son) or other kids in this regard?

Sometimes people need to suffer consequences before they’ll make a change. This is human nature. If you can’t get him to see the value in it, just give him time.

A lesson I learned early on is that you must be self-responsible. This is true in training, your personal trainer or coach can’t do the work for you. This is true in health. Your doctor doesn’t live your life or eat for you, and most of them are simply drug pushers anyway. And this is true in every other area of your life too. Once you seize that responsibility for yourself then you can begin to make changes and differences. The reverse of what Uncle Ben told Spiderman is also true: “With great responsibility comes great power.”

Born without genetic gifts, a weak and scrawny Logan Christopher sought out the best training information in his pursuit of super strength, mind power and radiant health. Nowadays, he’s known for his famous feats of pulling an 8,800 lb. firetruck by his hair, juggling flaming kettlebells, supporting half a ton in the wrestler’s bridge and more. He is the author of many books, a coach and a public speaker. Discover how you too can become super strong, both mentally and physically, at www.LegendaryStrength.com and find the superior herbs to support all aspects of your performance at www.SuperManHerbs.com.

Hercules vs Arnold: The Difference Between Strength and Hypertrophy