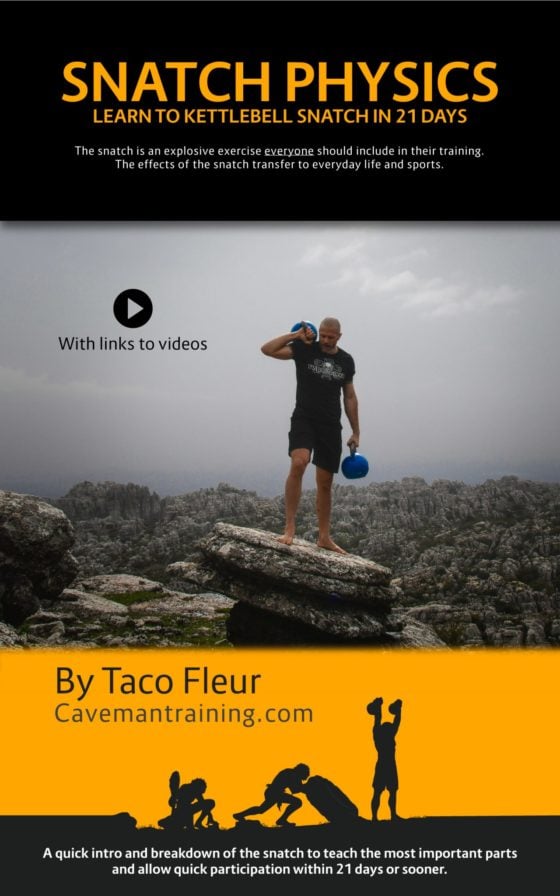 Snatch Physics From Zero to Snatching in 21 Days

Learn how to snatch in 21 days. Go from zero to snatching comfortably and understand differences or how they affect your snatch.

After purchasing you’ll have direct access to download the book from our website. If you prefer a hard copy/printed version or Kindle, you can also purchase this book on Amazon.com. The book is also available on iTunes.

There is also the option to join our online snatch camp and be mentored by the author himself.

Snatch Physics, the snatch broken down. In this book, I’ll not only cover the physics taking place on the kettlebell during the snatch movement, but also break down the movement step by step with photos and descriptions.

The snatch truly works each and every major joint in the body, ankles, knees, hips, shoulders, elbow, and wrists. For strength, you can’t deny the major areas that will improve, such as, latissimus dorsi, deltoid, triceps, erector spinae, abdominals, glute, hamstrings, calves, hip flexors, quadriceps, lumbrical muscles, and many more.

All these properties make it the king of kettlebell exercises, an exercise everyone should include in their training. Mastering the snatch takes time, as someone who has completed 532 unbroken snatches in 30 minutes, working with kettlebells for over a decade, and trained thousands of people across the world, I’m able to break down the snatch step-by-step in such a way that you can go from zero to comfortably snatching at the end of the 21 days.

MOVEMENT DESCRIPTION
When we pull the kettlebell up, we’re applying force to the kettlebell and therefore accelerating it. Since we increased its acceleration, jerk happens, and velocity increases as well.

Finally, we apply force during the press to stop the kettlebell from going too far behind our head (we apply force, therefore change the acceleration, therefore jerk happens here again). In this case, we call it deceleration jerk because the direction of the force (and of the acceleration, remember they’re tied together) is opposing the direction of the velocity (the kettlebell’s velocity direction is towards the lifter), and that’s why the velocity decreases until the kettlebell stops moving (that’s when we stop applying forward force and we’re only applying vertical force in order to hold the weight of the kettlebell). Part of its kinetic energy transformed into potential energy (during the final position the kettlebell is further from the ground than before) and part of it was absorbed by our body and muscles.

Not sure how to download? Don’t know what the password is?
Don’t know where to save the file on your computer?
Check out our FAQ.

Only logged in customers who have purchased this product may leave a review.

There are no questions yet

Your question will be answered by a store representative or other customers.

Thank you for the question!

Your question has been received and will be answered soon. Please do not submit the same question again.

Thank you for the answer!

Your answer has been received and will be published soon. Please do not submit the same answer again.